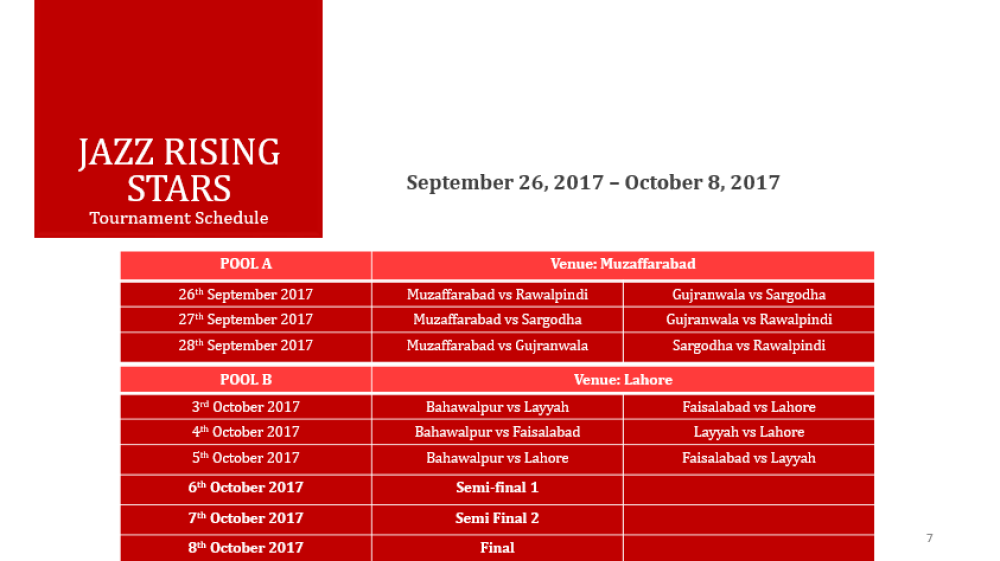 Islamabad - 14 September 2017: Jazz Rising stars, the award winning movement that showcased Pakistan’s cricketing talent to the world, recently completed 5 city trials for its second season. These trials were held in Mirpur, Muzaffarabad, Rawalpindi, Sargodha and Layyah. Under this cricket talent hunt, the first city team of the tournament was selected in the shape of Muzaffarabad, while the other three city teams included Rawalpindi, Sargodha and Layyah.

Despite the scorching summer heat, the trials of the first four city teams witnessed participation of numerous enthusiastic players who came in numbers; 15,000 players participated from Mirpur, 19,000 from Muzaffarabad, 23,500 from Rawalpindi. 13,500 from Sargodha and 7,500 from Layyah.

This initiative by Jazz is in line with the brand’s commitment to promote sports as an integral part of Pakistan’s culture and lifestyle. Moreover, for the first time in Pakistan Jazz Rising Stars will not only scout top talent from the streets of Punjab, but also from Azad Jammu and Kashmir (AJK) and carry their unbridled passion for cricket to newer heights by setting up training and development programs.

Speaking about this initiative for the youth, Shahbaz Maqsood Khan Director Marketing, Jazz said: “Pakistan is a cricket-loving country, and possesses rich talent but lacks the infrastructure to scout emerging cricketers coming from smaller cities and towns. Jazz Rising Stars is determined to showcase this raw talent by grooming and training these players on international standards.”

“With the formation of the first four teams of the second season, not only have we found extremely talented cricketers,” he concluded.

The best tournament players will represent Lahore Qalandars, to have a taste of the third edition of Pakistan Super League (PSL) 2018. Selected players will also be sent to Australia to train with Sydney Thunders in the Sydney Triangular Series followed by the Emirates Cup in Dubai.

Trials will now be conducted in the remaining four other cities – Bahawalpur, Lahore Gujranwala and Faisalabad with the Jazz Rising Stars T-20 Tournament set to begin on 27 September, 2017.