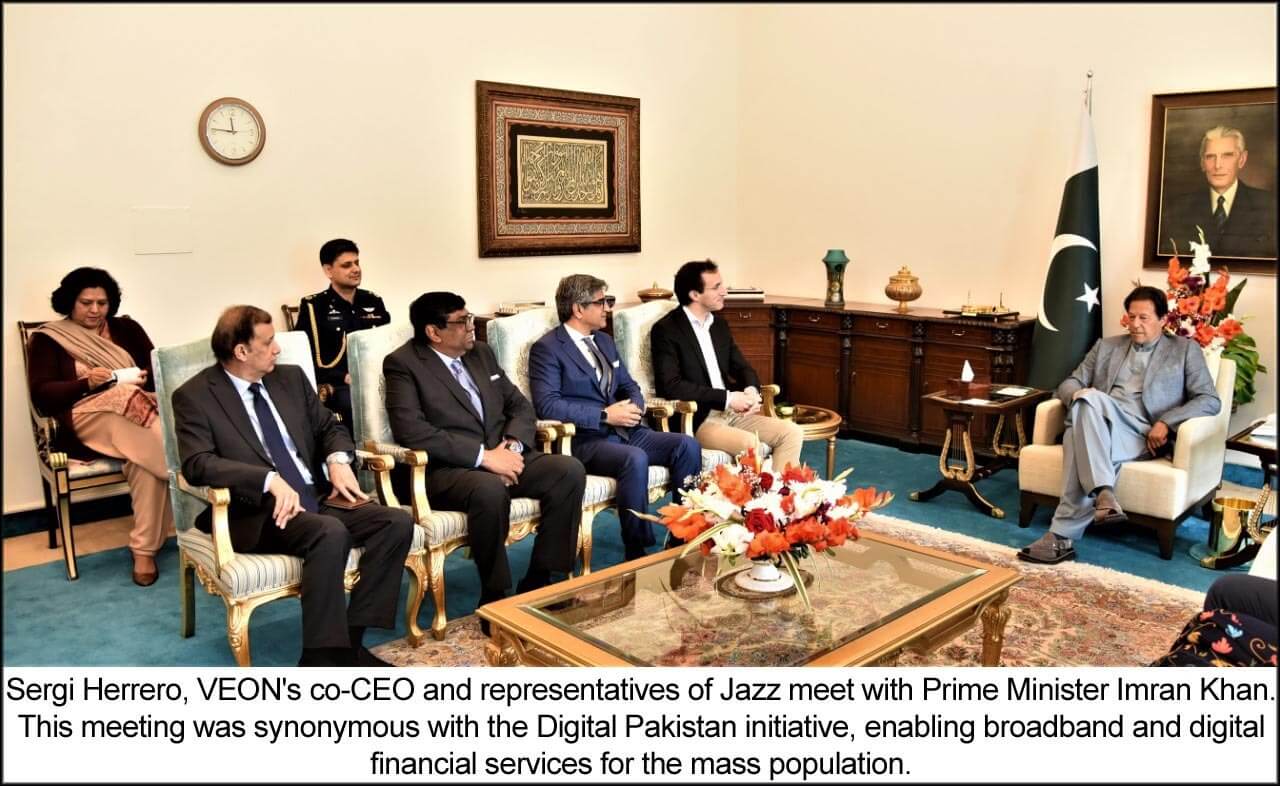 During his visit, Sergi called on Prime Minister Imran Khan in Islamabad to discuss collaborative ways in which VEON and Jazz can assist with the country’s socio-economic development through further advancements in telecommunications, internet & digital financial services, and be a partner for Digital Pakistan and extension of digital services to the masses. This meeting was synonymous with the Prime Minister’s Digital Pakistan initiative, enabling broadband and digital financial services for the mass population.

Prime Minister appreciated the long association of VEON with Pakistan having US$ 9 billion investment and serving 60 million subscribers with a multitude of services.

During the meeting, Prime Minister Imran Khan highlighted that Pakistan has great investment potential in the communications and energy sectors. The government is focused on providing ease-of-doing-business with liberal investment policy which has been acknowledged by international financial institutions. The Prime Minister stated that his government has launched “Digital Pakistan” initiative with the aim to provide a platform to the Pakistani youth to become independent and drivers of economic growth.

The Prime Minister stated that, under the Vision 2025 and the Digital Policy, the government has aimed to increase the size of the Pakistani ICT industry to US $ 20 billion by the year 2025. He emphasized that a digital ecosystem with infrastructure and institutional frameworks for rapid delivery of innovative digital services, applications and content is being provided to the IT proficient youth.

Prime Minister Khan highlighted the key role of Telecom sector in the economic growth of the country being one of the highest tax paying sector and major foreign investment.

Sergi apprised the Prime Minister of plans including pursuing growth opportunities in 4G services both through traditional connectivity and growing ecosystem of new tech services, and by utilizing the Group’s new Ventures division to accelerate the growth of digital financial services via JazzCash. He pledged the Group’s full support towards the Government’s #DigitalPakistan agenda.

He also highlighted Jazz’s role in the digital transformation witnessed across various sectors through a growing customer base of 60 million subscribers connected via 25,000km of optic fiber backbone in 1000+ cities. Sergi highlighted how the Group’s investment has allowed for more than 12,500 sites nationwide making Jazz not only the largest network but also the fastest internet provider in the telecom sector.

“The government has been supportive of the telecom sector in recent years and we appreciate the role they have played in building a conducive environment for foreign investment. Going forward, we fully support a scalable licensing regime for the industry, and an enabling tax framework that strengthens the digital ecosystem, promotes FDI and fosters entrepreneurship,” said Sergi Herrero.

Jazz CEO Aamir Ibrahim was also present at this meeting.

“Leveraging on our expertise and leadership position, we have responsibly led the digital transformation that Pakistan is witnessing today. From the ease of internet access to innovative and affordable digital technologies, the company’s efforts are focused on bridging the digital divide in Pakistan and opening doors of equal opportunities,” added Aamir Ibrahim.

This visit illustrates the growing importance of Pakistan’s market in VEON’s portfolio, as this is Sergi’s first foreign visit since the Group announced his appointed as the Co-CEO, effective from 1st March 2020.